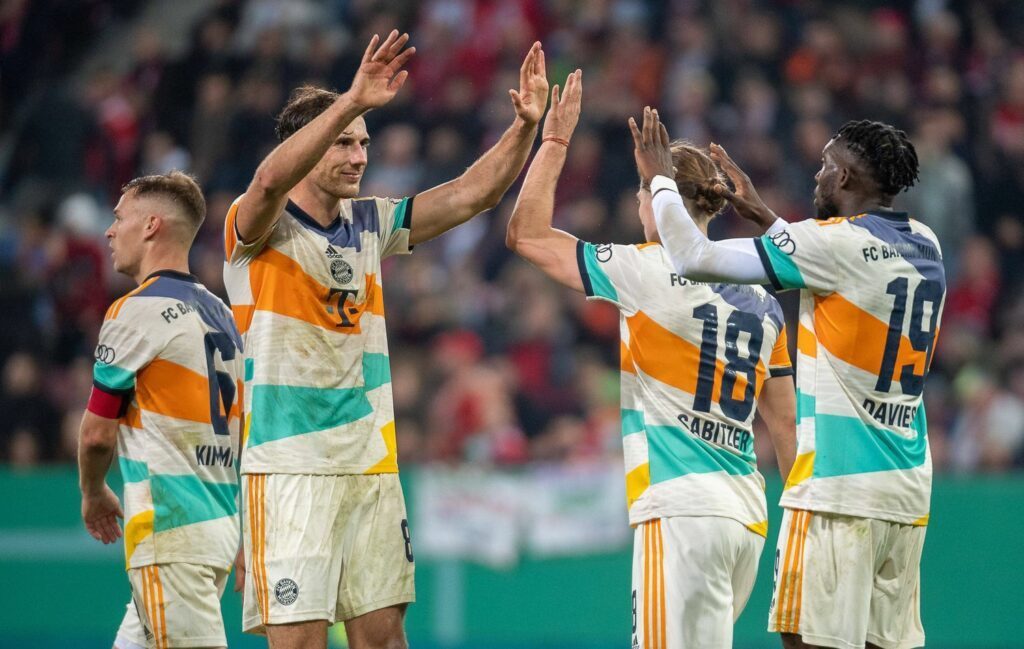 After 5:0 victory over Freiburg, FC Bayern have continued their good form and great football in 5:2 Victory over Augsburg in DFB Pokal. When the game started it looked like another headache for all Bayern fans, but everything was resolved quickly, and good old Bayern fashion style of football was back and let’s see some interesting details of this game.

Attacking play was in full mode

Something that bothered all Bayern fans this and last season was the lack of fluidity in attack, but both yesterday and on the weekend against Freiburg, all attacks looked so clean and so simple, and every pass was direct and the whole gameplan was really fast. Augsburg pressed really high but it did not bother Bayern players too much and the whole progression with the ball reminded us how this team can look when the most important games come.

Alphonso Davies is back to his best

After a really hard 2020/21 season, Alphonso Davies was sidelined last year for almost 4 months because of the heart issues and when he was back on the pitch he did not look confident and strong as before. This season Phonzie is on another level and even in some aspects looks more dangerous then in 2020. Yesterday he played one of his best games in Bayern jersey, completely dominating whole left side and contributed with amazing assist and a goal, but for the whole 90 minutes whenever he had the ball, it was dangerous for Augsburg defence. His recovery and defence have also improved this season and he was on point in this game as well in that aspect.

French defender Dayot Upamecano was a bit dissapoiting last season with some clumsy performances in some crucial games and that transferred a bit to the start of this season, but since the Barcelona game, he is finally showing why the whole Europe wanted Upamecano to lead their defences. His timing and decision making have improved a lot and his calmness with the ball gives Bayern a breath when the other teams start to press. His positioning was crucial when Augsburg players wanted to start a counter attack, and he stopped all of them with ease. Even though he had an unfortunate own goal, his game was absolutely spot on.

The biggest criticism for both players is that their finishing has been astonishing, but the most worrying part is that their link up game and their ability to dribble past defenders is not that good either. When Kingsley Coman entered in the second half, the attacking game became even better, because Bayern finally got some overlap from their wing positions. Sadio Mane is not even close to the one from the Liverpool regarding this aspect, and that needs to be corrected quick if he wants to prove all the hype, while Gnabry had some dangerous attacks but it is still not the same Gnabry from 2020.

This was one of the best games under Julian Nagelsmann outside of the Bundesliga and we can’t wait to see will this trend continue in the coming games in both League and Champions League!

De Ligt is a monster

Even though he had a difficult start at Bayern, Matthijs de Ligt has shown how vital he is to our defense. The Dutch defender won every duel and every challenge and once again had a fantastic match together with his partner Upamecano. His positioning and defensive awareness were once again spot on.