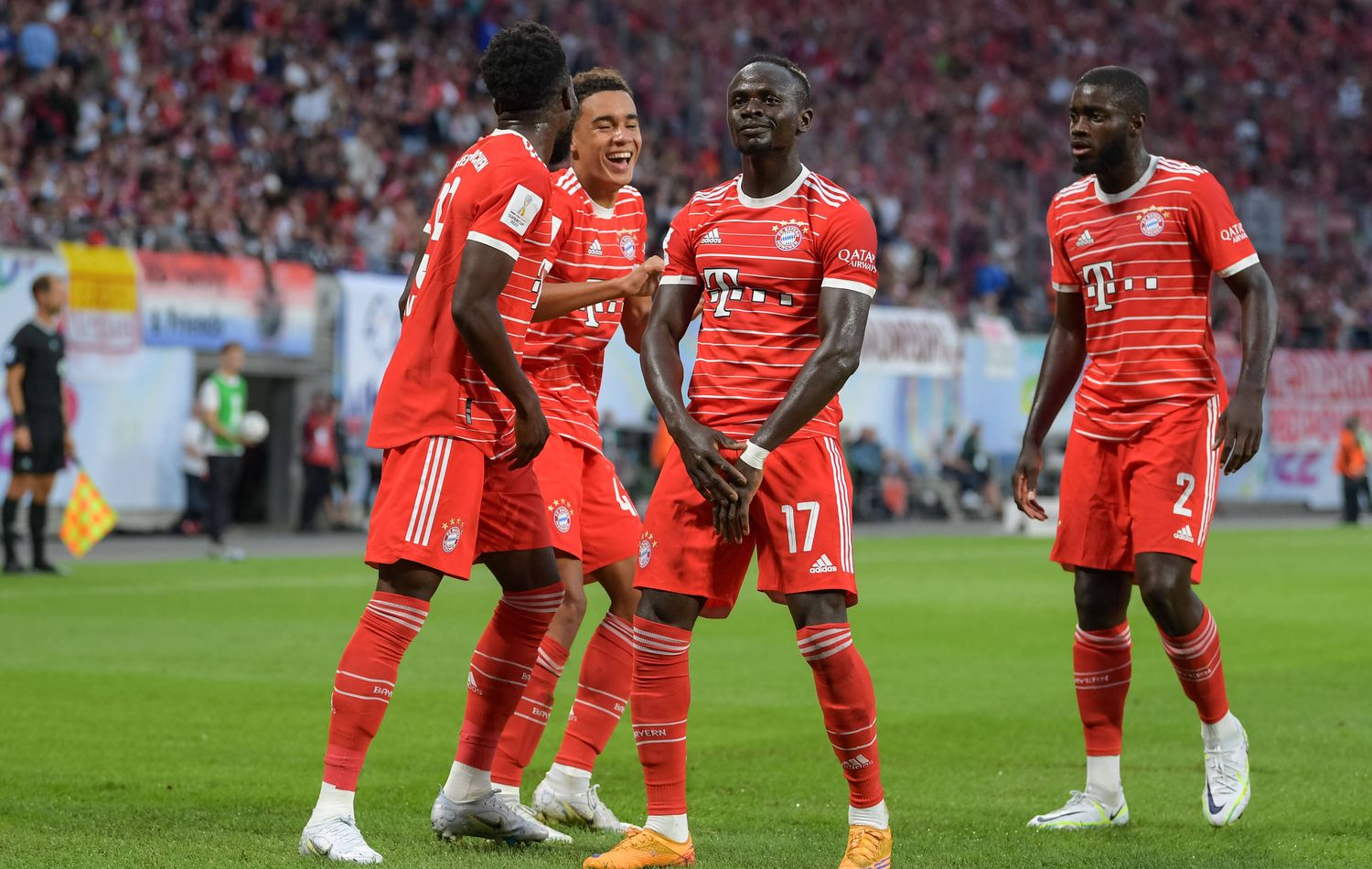 Bayern Munich have secured the first title as well as the first competitive win of the season. The Bavarians won 3-5 away from home against RB Leipzig.

Sadio Mané was the only new signing from Bayern who was allowed to play right from the start. While Mathys Tel was not allowed to play, Ryan Gravenberch, Matthijs de Ligt, and Noussair Mazraoui were initially on the bench.

Nagelsmann went for a 4-2-2-2 with Marcel Sabitzer in defensive midfield as Goretzka’s replacement. In the attack, Jamal Musiala was preferred over Leroy Sane and Kingsley Coman.

In the 13th minute, Bayern appeared dangerous for the first time in front of the Leipzig goal when a Pavard cross was blocked in the box. Just a few seconds later, it became much more dangerous when Jamal Musiala gave Bayern a 1-0 lead with his first shot on goal. Just three minutes later, the ball wriggled into the Bayern goal. However, Christopher Nkunku’s goal was disallowed due to an offside

In the middle of the first half, Bayern was more dominant during the game and at times had more than 70 percent possession of the ball. In the 31st minute, Gnabry put it on Mané in Leipzig’s penalty area, who made it 2-0 from close range. Shortly before the half time break, Pavard made it 0-3 after a great pass from Jamal Musiala

A much more balanced game developed during the second half with Leipzig becoming more dangerous than in the first half. Szoboszlai hit the crossbar in the 56th minute, while three minutes later, Halstenberg scores from a corner and makes it 1-3.

In the 66th minute, Bayern were quick to respond with Gnabry who made it 1-4, while a few minutes later, Mane had a goal disallowed for offside, although in the replay, it did not look quite one, but that wasn’t the first disallowed goal.

After a tough challenge from Pavard on Andre Silva, Nkunku received a penalty and reduced the lead to 2-4 in the 77th minute. Shortly thereafter, Nagelsmann brought in three fresh players in de Ligt, Mazraoui, and Sane. Previously, Ryan Gravenberch Kingsley Coman came on.

In the 85th minute, another Mané goal was disallowed for offside. Shortly before the end of the game things got hectic again. Dani Olmo scored in the 89th to make it 3:4. Seconds before the referee would whistle for the full time, Sane made it 5:3 in the 98th minute due to a delayed extra time after Alphonso Davies received a small injury which he was treated for afterwards. He also assisted Leroy Sane in the last goal

This 3-5 victory marked Bayern’s first competitive win and title of the season, but not only, Bayern also won the 10th German supercup title in the history.