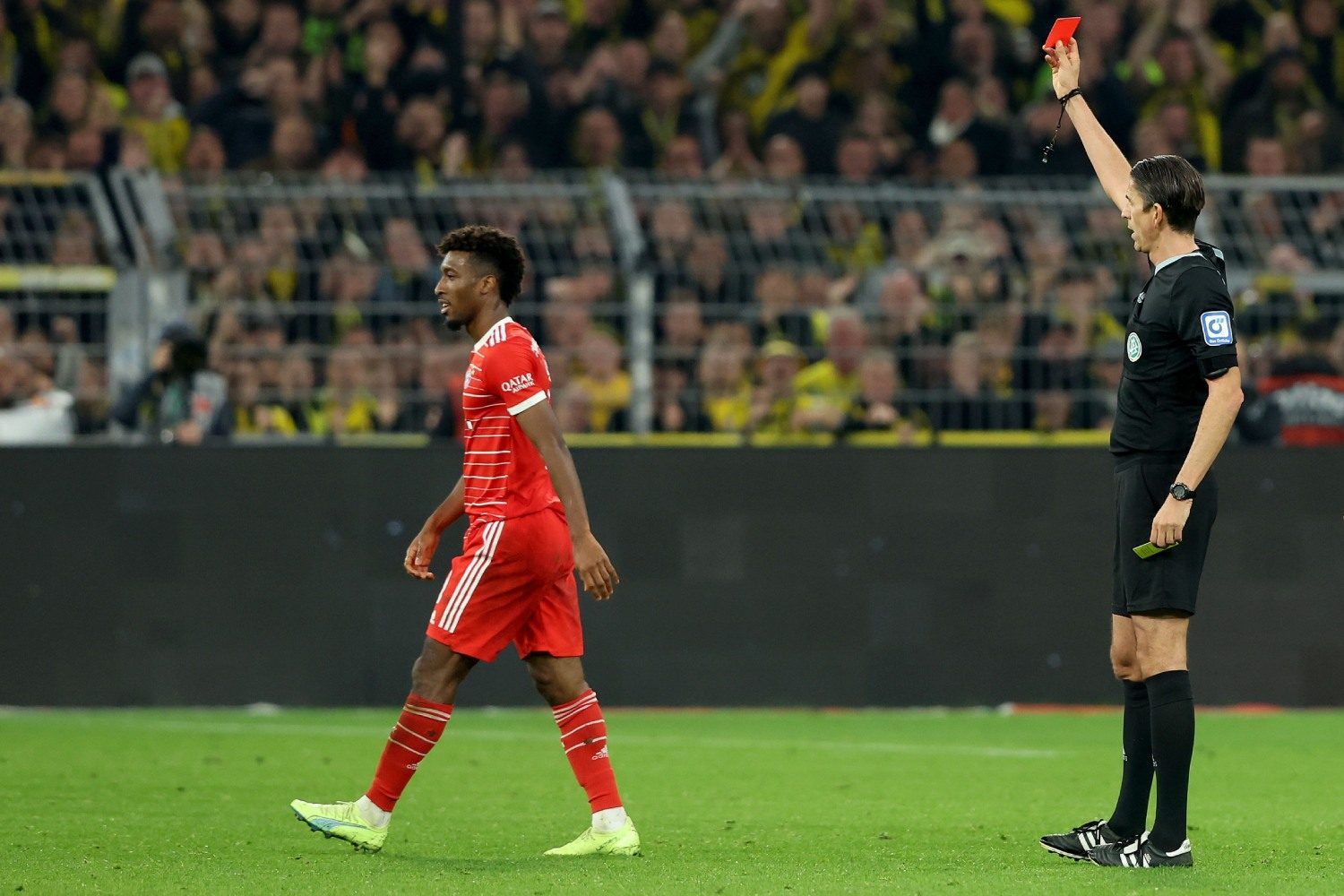 Headlines from Der Klassiker on the weekend have been fronted with FC Bayern CEO Oliver Kahn’s reaction to Dortmund’s 95th-minute equaliser, and failure to dismiss midfielder Jude Bellingham following his foul on Alphonso Davies, which ultimately decided the match later on

As previously discussed on Sky following the match, referee Deniz Aytekin defended his decision to not send Jude Bellingham off in the match, claiming ‚although there was contact, I lacked the ultimate conviction to [award] a yellow-red and ultimately decide such a match‘

Alphonso Davies was immediately taken to hospital with a suspected concussion, and returned the diagnosis with a cranial bruise and concussion. Julian Nagelsmann said ‚Four months ago we had a training course. The [DFB] said a kick to the head is a straight red card….Maybe there’s arguments. But it’s definitely a yellow at least‘

Aytekin countered his argument, ‚you can certainly see it that way. The process was such that the first yellow card came in a hectic phase. He received a ‚maybe yellow card‘, not mandatory. In the situation, [Phonzie] came in from behind and put his head down. But it’s not a clear red card‘, specifically addressing Nagelsmann’s claims

Former Bundesliga referee Manual Gräfe, who retired mid-2021, suggested a slightly different problem: ‚Aytekin made the situation difficult for himself after awarding so many early yellow cards‘, he reflected. Lothar Matthäus, meanwhile, also sided with Die Roten, ‚There’s no need to discuss it at all. That is a second yellow card and therefore yellow-red. It doesn’t matter if the referee says [Phonzie’s] head was a little low. He nodded down but wasn’t all the way down. The foot was in his face and the foot has no business up there. No intention, but still a foul which must be penalised with a yellow card‘

‚Perhaps too much empathy‘ – Aytekin

In another live TV show on Sport1’s Döppelpass, Deniz Aytekin stated ‚as a referee, you….have a certain amount of leeway you can use….so I can understand every Bayern fan who says that’s a yellow‘, but then also suggested ‚it was perhaps a bit too much empathy‘, referencing his previous statements immediately post-match in the mixed zone where he was convincingly ‚empathetic‘ to Jude Bellingham’s bookings. This was critiqued by Oliver Kahn, posting on Twitter ‚Where was Deniz Aytekin’s empathy with the yellow-red card for Kingsley Coman?‘

Aytekin explained ‚The [Coman situation] hugs him and only has one goal [to stop the player and not win the ball], which leads to this consequence. The first card [high tackle] is clear, we don’t have to discuss. The second one is also clear and there is no option left for you as a referee‘, which, logically, is a sound explanation. However, the statements on Döppelpass and backtracking on his initial statements maybe suggest a wrong decision was made after all

Regardless of the refereeing results, Kingsley Coman’s suspension will stand without question, and the result has come and gone. FC Bayern will need to pick themselves up against Freiburg next weekend in the Bundesliga, following a midweek Champions League match against Viktoria Plzen. They’ll be without Alphonso Davies and Matthijs de Ligt, who also picked up a slight knock during the Klassiker match