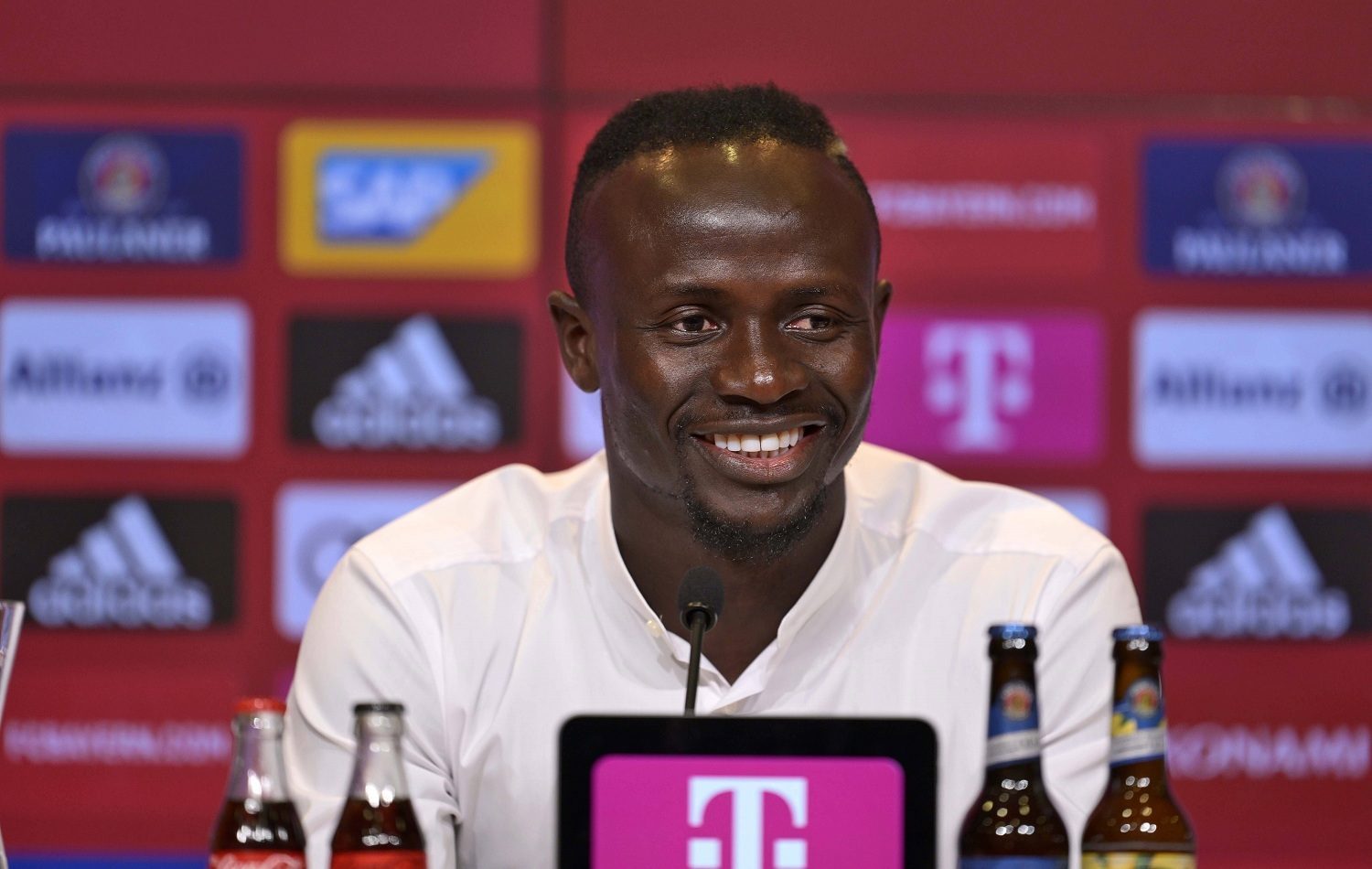 Sadio Mane was announced today as a Bayern Munich player and signed a three years contract for the Bavarians. At 16:00, the Senegalese has been unveiled as a Bayern player and will join Herbert Hainer, Hasan Salihamidzic, Oliver Kahn in the press conference.

Sadio Mane starts the press conference with this statement: “First of all, I would like to say hello to everyone. It will still take me about three months to speak good German again, so I will answer in English. I chose Bayern because it was the best project for me. I had other offers but FC Bayern was always my first target, I want to help the team win more trophies.“

… on Julian Nagelsmann: „I met the coach, it was very important for me to get to know him and the project. When they explained to me what the idea was like, I immediately saw myself in this project and didn’t think twice. I said yes straight away, I just see myself here and as a support for the team. So I made the decision immediately.”

… on the Bayern’s squad: „I was at a good club myself, we had great success and I can say that I achieved everything there. But I’ve followed the Bundesliga and seen a lot of Bayern games and I have no doubt that this is one of the best teams in the world. We’ll see how the whole thing develops.“

… on bringing his family to Munich: „I think I left my parents‘ house when I was 19, it wasn’t easy for me. I could handle it, but of course, I want my whole family – especially my parents – to be here. My mother doesn’t want to leave me alone here, but I also have my friends and my uncle around me. But I am a big boy and I can live on my own, but in the future, I would like to live with them, yes.”

… on his favorite position: „I think the person who can best answer this question is sitting here (laughs and points to Julian Nagelsmann). I’m a player who can play three or four different positions. I’m just happy when the coach doesn’t put me in goal or defense.

… on whether Jürgen Klopp has spoken to him about Bayern and Germany: „I don’t know if he was very happy that I came here. He’s a great coach. I’ve developed a great relationship with him. I’ve also followed the Bundesliga for many years in Salzburg. I have enough knowledge“

… on what the signing means for Senegal: „As a player, you always represent your country. We Senegalese always try to present our colors in the best possible way. It is also always a good sign for youth if you work hard on yourself. Of course, I also want to make everyone proud in my home country.”

… on the possible shirt number: “It’s not a bad thing for me, but of course, there are some interesting numbers. I’ll make up my mind when the time comes. For me, it does not matter.“

… on his goals at Bayern: „It’s a challenge for me, my whole life is one. At Bayern, the task is to win every title. The club is very big, and the players are made to win titles.“

… on Liverpool: „I’ve spent six wonderful years in Liverpool, with fantastic people. Of course, nobody was happy about it, but that’s part of life. I was looking for a new challenge after eight years in the Premier League. Klopp is Klopp, you all know him. Of course, he wanted to keep me there. He’s a great guy, he understood my situation. I wish Liverpool nothing but the best.”

… on Müller: „Thomas Müller seems like a nice guy, although I don’t know him yet. I can’t wait to join the team and get to know everyone.“

… on Sarr: „Yes, I spoke to Bouna Sarr at the national team and he was very happy that I was coming.“

… on the city of Munich: “I’ve been here for two days and I’ve spoken to a lot of fans. It’s a beautiful city, I’m already in love. I am happy to be able to live here“

… on being injured rarely: “You need a bit of luck, but I take care of my body and work on myself. I have dedicated my life to football.”

… on his biggest challenges at Bayern: „I was lucky enough to play in France, Austria, and England. As I said, I’ve always worked very hard to play in the biggest clubs and Bayern is part of one of the biggest clubs in the world. If you know you’re playing for Bayern, you know what you’re preparing for.“

Oliver Kahn: “First of all: welcome, Sadio! We needed changes in the squad. We want to ensure fresh blood and new stimulation points. We managed to bring an absolutely world-class player to Munich for three years. He is very flexible, very fast, and extremely dangerous. He’s an absolute professional, I liked that from the start. He wants to win titles, he has landed at the right club.”

… „I was really happy about the transfer. I know what it can do to a team, even to the players. The way he plays football and his mentality, he will raise the level of the team again. That’s why it’s so important to have such players in our own ranks.“

… on Lewandowski: „Not much has changed for Robert. He has a contract until 2023 and we look forward to seeing him on the first day of training.”

„We’re not dealing with that at the moment. It is our responsibility to ensure that this club is as successful as possible. Robert has shown in the past how important he is to this club. He has a contract until 2023 and we are not concerned about anything else.”

... on the squad: „Of course, the top players in the squad look at what the club does for transfers. That radiates internally. Every one of us wants to win the most important title, the Champions League. But we can’t just say that, we have to witness it. We want to create a team that can do that.“

… on transfers: „The transfer market will be open for a long time. We’re still watching what will happen. We’re not satisfied with the second half of the season and we know exactly where we need competition and where we need to set stimulus points. We want to be super successful.“

Hasan Salihamidzic: „It was a great experience for me. I would like to thank Sadio’s agent for the good cooperation and the trusting negotiations. We were also very fair with Liverpool, that’s the way it should be. Sadio is a world star, we are happy and proud that he will join us. He’s not just a great footballer, he’s also a mentality monster.“

… on transfers: “It’s only June. We will continue to keep our eyes open and see what is still possible and what is financially feasible.”

… on how Mane decided to join Bayern: „We talked to Marco Neppe and his agent in the garden. Then his name came up, but I didn’t believe it at first. I then took him to the door and asked if it was serious, he said yes. I called him later and told him that we want to do everything we can to make this happen. We did this as quietly as possible. Julian [Nagelsmann], Marco [Neppe] and I flew to Liverpool to visit him. None of us are used to bringing such world stars in Munich. It’s not easy, especially when Premier League clubs are financially stronger than us. I was impressed by how quick and crystal clear Sadio was in the first conversation. Those who were won over by FC Bayern from the very first minute had a lot of fun and were very successful here.”

Herbert Hainer: „We are proud that we brought a player like Sadio to Bayern. We lived up to our claim that FC Bayern should be one of the biggest clubs in the world. I would also like to thank Oliver Kahn and Hasan Salihamidžić for making this transfer possible. Finally, I would also like to congratulate Sadio.”