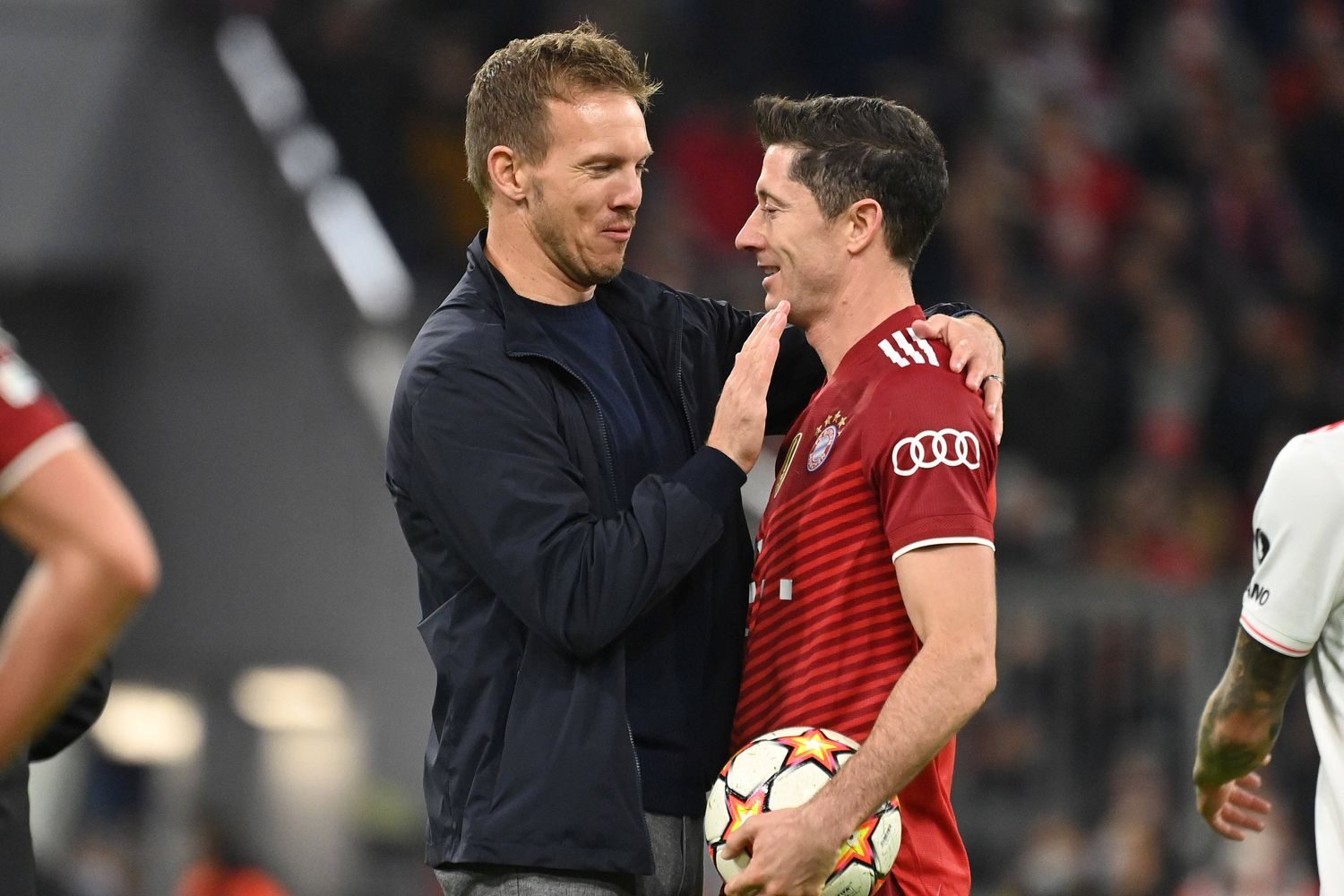 Bayern Munich will be hosting Union Berlin at the Allianz Arena on Saturday. They currently stand 8th in the Bundesliga table and have won 1 out of 4 games recently so far.

The gap with Borussia Dortmund is closing greatly at the top and the record champions have extra duty to prove themselves that they are worthy of the tenth consecutive league title. The team will be looking to win the matches at all costs. Here are the most important statements from Julian Nagelsmann’s presser:

… on UCL draw: “First and foremost, we want to qualify. Villarreal are the reigning Europa League winners. They have a coach and a team with a lot of experience and a clear plan. They often play very similar and finished second to Manchester United on the group stage. They won 0-3 against Juve. Our aim should be to qualify, but first, we have to play and win.”

… on squad updates: „Lewy and Choupo are here with us again. Choupo has recovered from being a little ill. It was also a precautionary measure for Lewy. He did well today. […] Süle should be back after the international break. [..] Coco [Tolisso] is back in the squad and could also play. He feels very good and has trained very well. […] Leon [Goretzka] is also back, we have discussed with him, but he won’t be an option. With Phonzie we can slowly increase the intensity of the training, but that will take another three to four weeks. Then he might be ready for the second leg against Villareal“

… on Union Berlin: „They lost quality players with the departures in winter, and like us, the results weren’t quite as consistent. But it’s a very disciplined team that defends incredibly aggressively. I think Awoniyi will play because he’s an incredibly quick player and I assume that they will also rely a lot on the counterattack tomorrow.“

… on the contract situations of Müller, Lewandowski & co: „They are very important to us, but the media always portrays it in such a way that it’s always very easy. But in conversations like this, you always have several talks with the players and especially with the agents, but it’s not always quite so easy. They are three experienced players whom we need and who are great for us. They have all shaped the face of FC Bayern for several years. It is positive that all three of them already have the experience of dealing with similar situations and that doesn’t affect their performances“

… on Upamecano: „He is making a very good impression. It’s normal for him to be affected when there is criticism. But both as a coach and as a player you prepare yourself for the club and the media. That’s why he isn’t surprised by the feedback. But I have a lot of faith in him. I never have and will never ask him to play like a midfielder, I demand strengths from every player and Upa’s strength is clearly defending. He will play tomorrow and I expect he’s going to play a good game.“

… on the defense’s leader: „It’s always good when several players take on the role of leader. I certainly count Hernandez among them, who expects the same from himself. He speaks German, French and Spanish very well and can therefore communicate well with everyone. Tanguy will probably be like Upa, he has his strengths in defense. His last game in the Champions League against Benfica was outstanding and he should build on that.“

… on Matthäus criticism towards the board: „I think it’s generally good that Lothar Matthäus is expressing his opinion. that’s his job too. However, it is always easier to judge from the outside than at the end of the table with the agents, it’s harder than buying the Whitechappel on Monopoly“

… on Nianzou: „When you talk to him privately, his desire for the central defender position is far greater than for the defensive midfield. He has huge potential but also plays for a big club. You have to create a situation where you are able to give the young or new players more playing time. That was often possible in the first half of the season, but we’re not in a comfortable position at the moment.“