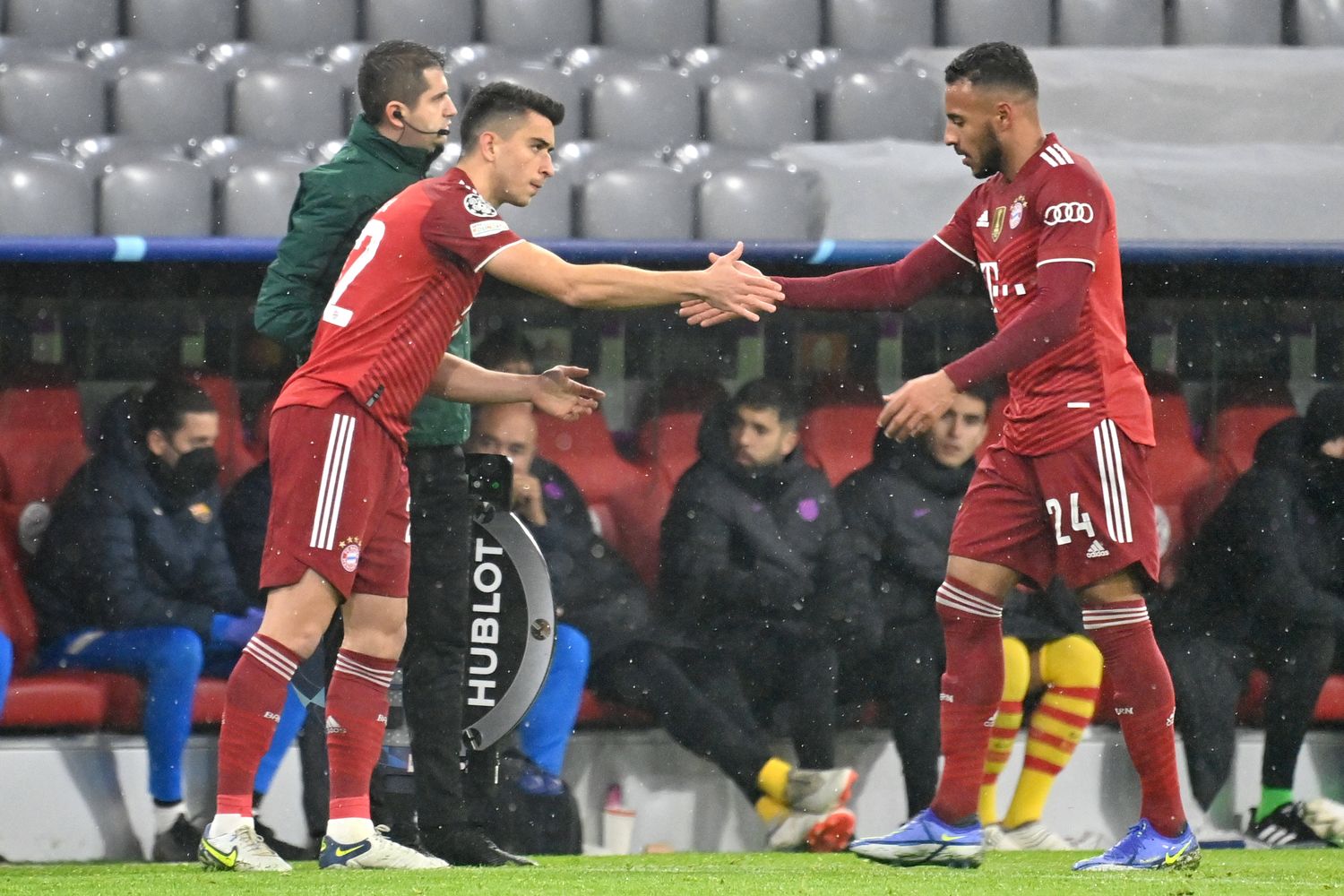 As we are slowly approaching the end of the season, Bayern Munich are found once again to be planning a revamp on the squad. The club is still fighting for the Bundesliga and is still in the race for the Champions League title.

We are looking at the list of the players who are most likely to be loaned, and most likely to be sold, based on probability percentage. The list is made combined and based on the media reports, the players‘ performances, the club’s trust, and many factors. The ranking is not made in order and Niklas Süle won’t be included in the list.

The Austrian midfielder joined Bayern from RB Leipzig in August 2021 as the most desired player of Julian Nagelsmann. Since then, the midfielder has been able to establish himself in the squad, due to numerous setbacks, and missing out on the pre-season preparations due to injuries certainly did not help him either. There are numerous doubts surrounding his future, but the club seems confident that Sabitzer will have his breakthrough once he fully participates and integrates himself.

Probability to leave: 10%. Despite the criticism, the club is confident in his qualities. They definitely want him to improve his performances, but they are not giving up on him just yet.

Bayern Munich have struggled to find a suitor for the Senegalese who didn’t have any thoughts of leaving the club. Sarr joined Bayern from Marseille in the autumn of 2020 as Alvaro Odriozola’s replacement, and hasn’t been able to receive more minutes, despite his fitting profile of an attacking right-back. Most recently, the Senegalese has made solid performances for his national team in the African Cup, playing every single game and winning the trophy in the process. There had been inquiries in winter for Bouna Sarr from Italy and Turkey, but they were all refused. Sarr now wants to leave the club in the summer and try something new. This puts the club in relief, but of course, there could be appearing problems in selling the player.

Probability to leave: 60%. Sarr’s wish to leave the club himself in the summer makes it easier for Bayern to sell him, but the problem which appears is the high salary of 2.5 million of the right-back. You should definitely have doubts about whether his suitor could pay even more, or as much for a 30 years old. Unless that club is desperate, or insane.

Bayern have been trying to sell him since last season, but with Thiago’s departure and the inability to buy another midfielder during corona times, his departure in 2020/21 would have decreased the squad depth, therefore, the club decided on keeping him, with the hope that he would come back to his best. ‚Coco‘ displayed good performances in the Hinrunde, but later on that season he was once again plagued by injuries. Tolisso’s contract ends this summer and with all the attempts of selling him, the signs point out another inevitable free transfer, after Niklas Süle. The Frenchman was injured once again against Greuther Fürth 10 days ago and will be sidelined for a few more weeks.

Probability to leave: 90%. So far, there hasn’t been any serious rumor on possible suitors for Tolisso. But the club did try to keep him in winter. The attempts resulted unsuccessful as Tolisso had reportedly asked for a 16 million euro salary. His current contract runs for three more months, which means it’s highly unlikely that Tolisso should be staying unless something unexpected happens. The club is already working to seal the deal with Ajax for Ryan Gravenberch

His journey at Bayern has not been easy as he is still struggling to get a regular starting place. The Spaniard was one of the most sought players in Europe back in the day thanks to his performances in UEFA Euro 2019 for the Spanish U21s. Unfortunately, the demand for such midfielders decreased. Deemed widely a Xabi Alonso successor, the Spaniard hasn’t been able to impress the coaches, namely Julian Nagelsmann and Hansi Flick, who occasionally used him as a substitute in the second half for a few minutes. Having cost 10 million euros, Roca speaks pretty decent German and has expressed several times his desire to integrate and play more. Although a substitute, Roca has proved himself to be humble and very appreciative of his environment. The question is, will Bayern be appreciative of him too?

Probability to leave: 50%. With Roca, chances are split in half. It’s as likely that he stays and as likely that he leaves. Roca still wants to stay and prove himself more. The determination in him is there. But it will all come down if that determination in him stays for much longer or Roca would finally realize that he has no chance for a breakthrough. Bayern Munich will still put him on the sales list and will definitely sell him if there is a suitable offer in the summer.

Omar Richards, for a backup left-back, has played very little even when Alphonso Davies was out with myocarditis and still is for now. Instead, head coach Julian Nagelsmann has rather preferred Kingsley Coman as a left wing-back with Leroy Sane either as a number ten in a 3-2-4-1 formation or as an inverted winger in a 3-4-2-1 formation. With Nagelsmann wanting to establish a new era at Bayern with the back-three formation, it looks like Richards does not have his place secured. When you look at his qualities, he doesn’t seem to have the flashiness of Alphonso Davies or let’s say, of a skillful and quick fullback that is a perfect fit for Nagelsmann’s tactics. Even in a 4-2-3-1, which was last used against Greuther Fürth, Richards struggled heavily on the left and was often found isolated and unable to create quick solutions. Defensively, he’s been quite okay. But as you can see, Davies‘ absence has also impacted Sane’s form in general. It is not too alarming, though, as he does the job pretty well still.

Probability to leave: 60%, a loan would be the most likely option. With the recent rumors claiming that Bayern Munich could sell Omar Richards if a reasonable offer comes, one could say that Richards might become the first ‚victim‘ of what is called a „selling club“ strategy. But with Richards receiving little playtime, it might be unlikely that a club would want to buy a bench player who has a contract until 2025. So the most likely option is that he receives playtime at another club on loan. That would also depend on the clause that Bayern should insert, but with the club wanting to generate money at all costs, it would be more conceivable for Bayern to loan Richards out to a Bundesliga club and insert a buyout clause in the contract. It’s not a very discussed solution right now, but it would be best for all parties.

The Cameroonian has recently been linked with Juventus during the past few days as the Italian media has reported. Choupo-Moting has become a very solid back-up for Lewandowski since he joined amidst the doubts and is heavily trusted and appreciated within the team not only as a substitute but also as a person. He extended his contract at Bayern last year until 2023.

Probability to leave: 0%. There is absolutely no way that Bayern would sell him this summer. It is never going to happen.

The versatile young Frenchman who can play two positions, center back, and defensive midfielder is another most likely candidate for a loan this summer. Nianzou has struggled heavily at Bayern due to injuries and fierce competition in the defense as well as midfield. Though he seemed pretty solid whenever he came on, the coaches see it differently. They definitely rate him highly, but they’ve also been a little critical of his game, especially his unnecessary aggressiveness and clumsy mistakes. Considering all that, Nianzou decided to change agents in winter, though, nothing related to his current plans at Bayern, but more like a precaution. He still wants to establish himself at Bayern, but with a small number of minutes, it is not satisfactory.

Probability to leave: 30%, but a loan. Despite everything and his current situation, Nianzou’s qualities are rated quite highly at the club and by the coaching staff. Though the latter don’t trust him for now, as the competition is too fierce, for everyone involved, the best thing that could happen is a loan to a Bundesliga club or perhaps to RB Salzburg to gain experience and match practice. Nianzou might leave in the future if the situation does not change, but this summer it is far likely that he is loaned out.

Other candidates most likely to be loaned out: Malik Tillman, Josip Stanisic